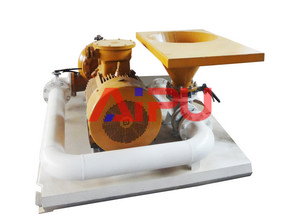 Jet mud mixer is used to make and mix drilling fluid to change the density and viscosity. Drilling fluid jet mixer can do the fluid weighting and mixing for solids control system used in 1500m-9000m drilling.

We know the HDD is similar with coal seam drilling. Since they all don’t request too large handling capacity. And the users prefer the system hold complete function including process, recycling, and mixing.